This very common technique is used daily by the vast majority of Sahaja practitioners and offers wide-ranging effects and benefits. Fundamentally, it employs the water element and salt, which represents the earth element. At the level of the subtle energy system, it can be extremely useful for cleansing or clearing out imbalances within the whole subtle system and, in turn, helping a wide range of problems, such as stress, anxiety, general fatigue, and insomnia.

The water element is especially effective in cooling down the right energy channel, which helps improve problem-solving and overall productivity and focus. When practiced regularly together with meditation, the foot soaking technique also improves the quality of your attention, as well as the depth and continuity of the thoughtless awareness state during meditation.

Left channel has a tendency to slow us down. Learn how to balance it. 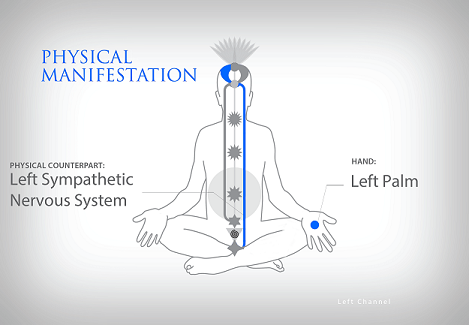 [*This remedy is commonly used in Sahaja; however, when to use it and for how long depends on the state of individual’s subtle system at the time, as felt through one’s own vibratory awareness. It should be used only when needed, according to the particular imbalance felt at that time.]

The fire element is used for more severe left channel imbalances, such as strong tingling, burning or painful sensations on the left hand. Meditating with your right hand on the ground and left hand open on your lap in front of a lit candle clears out left channel imbalances which might be causing lethargic organs, body aches, depression, mood imbalances and a number of other issues. One or several candles may be used.

Light in general — especially sunlight — nourishes and balances the left channel, so people who have a tendency towards left channel imbalances can try developings a more active lifestyle, spending more time outside or in well-lit places, especially during cold seasons, or when living in cold climate.

Right channel makes us more aggressive. Learn how to balance it.

The ether element has the capacity to absorb and neutralize the heat of the overworked right energy channel. Meditating with your right hand open on your lap and your left hand directed towards the sky (bend your arm at the elbow with your palm facing towards yourself and your fingers pointing upward) helps clear out the imbalances of the right channel, including stress, anger, restlessness, physical or mental overactivity, to name a few. 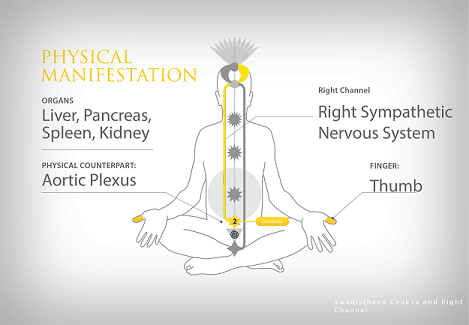 [*This remedy is commonly used in Sahaja; however, when to use it and for how long, depends on the state of individual’s subtle system at the time, as discerned through one’s own vibratory awareness. It should be used only when needed, according to the particular imbalance present in the system.]

Extreme cases of right channel imbalances are often due to an overworked, and as a result, overheated liver. Apply an ice pack to the lower part of your ribs (upper abdomen) on your right channel. This technique can help several problems arising from imbalances of the right channel, such as diabetes, hypertension, stress, and asthma. The ice pack should not remain on the abdomen for longer than 7-10 minutes, and should not be used during pregnancy or while sleeping. People who have a tendency towards right channel imbalances and an overheated liver should avoid spending too much time in direct sunlight, especially in hot seasons or hot climates.