Those of us who have not heard or read about Shri Mataji Nirmala Devi could be surprised that the personality of such stature has not reached their awareness before… The impact of Her work and Her contribution to the well-being of humanity as a whole is hard to estimate.

Her humanitarian and spiritual work draws admiration not only from countless individuals across the globe who have personally benefited from her teachings, but also from governments, dignitaries, educational institutions and organizations. She was nominated for the Nobel Peace Prize twice and received The UN Peace Medal, in addition to having a large number of other international awards and recognitions. 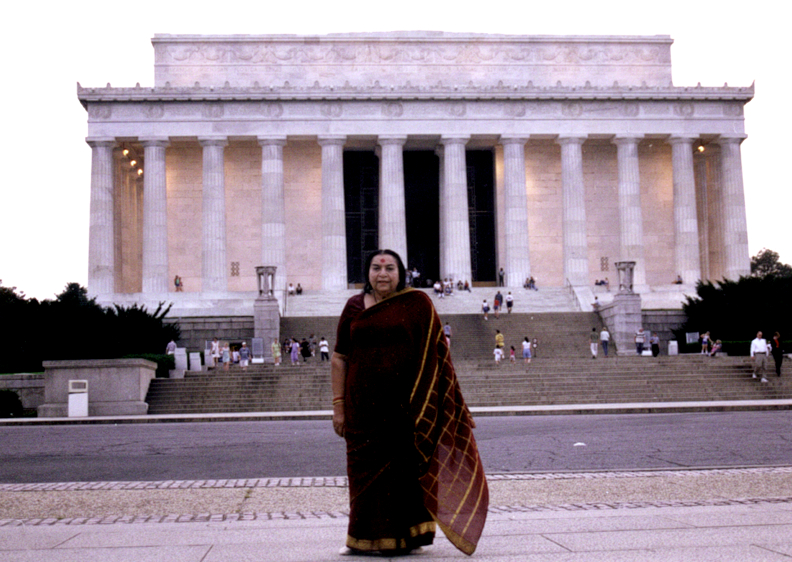 “Shri Mataji Nirmala Devi, the Mother, is recognized internationally as the most significant force in the world today and she will awaken in us the force that will change our life and change the world.” 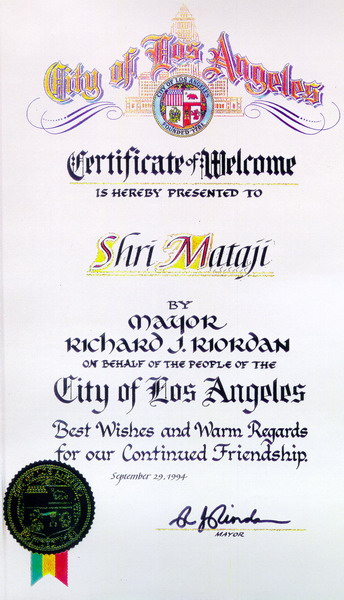 ●New York, USA,1994: Police escort was granted for a welcoming parade honoring Shri Mataji and celebrating her association with Mahatma Gandhi. The half day march originated on 5th Avenue and encircled Central Park.

●USA, 1999: Honorary Proclamation by the US Congress which was submitted to the Congressional Records. 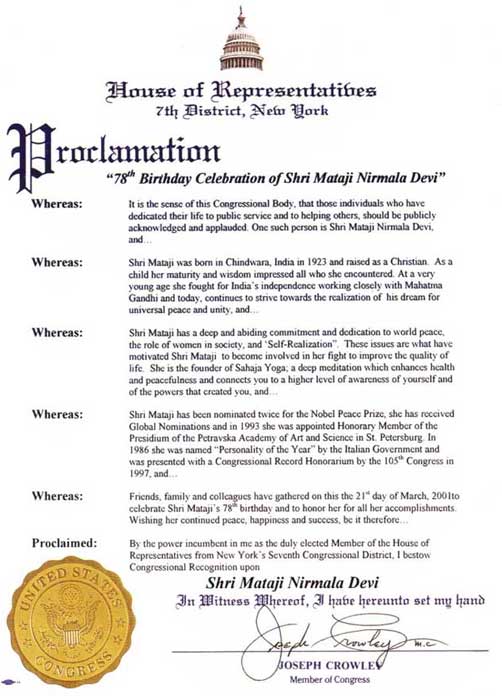 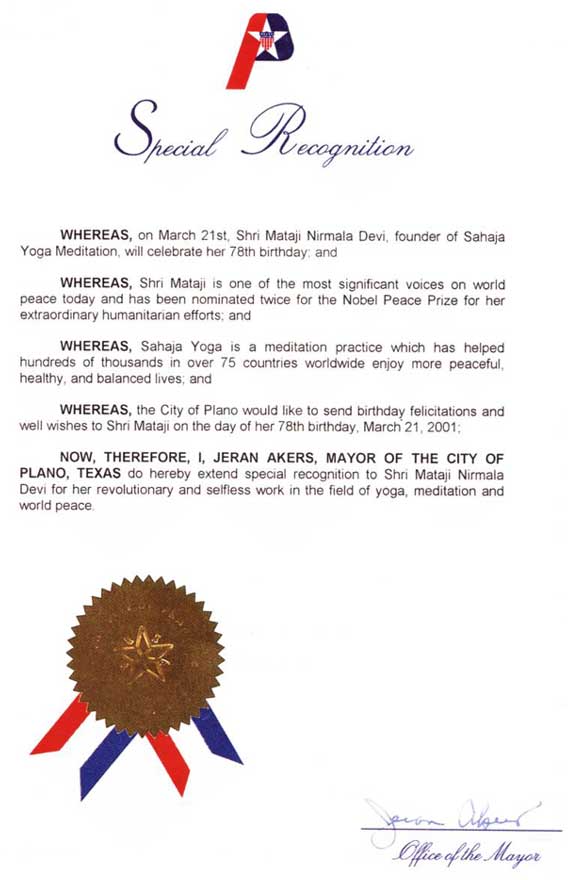 ●Toronto, Canada, 2010: Special Greetings on Shri Mataji’s 87th Birthday from Premier Dalton McGuinty on behalf of the Government of Ontario.

●Washington, USA, 2010: Birthday Congratulations from the White House by Michelle Obama and recognition of Shri Mataji’s life as an important part of the American story. 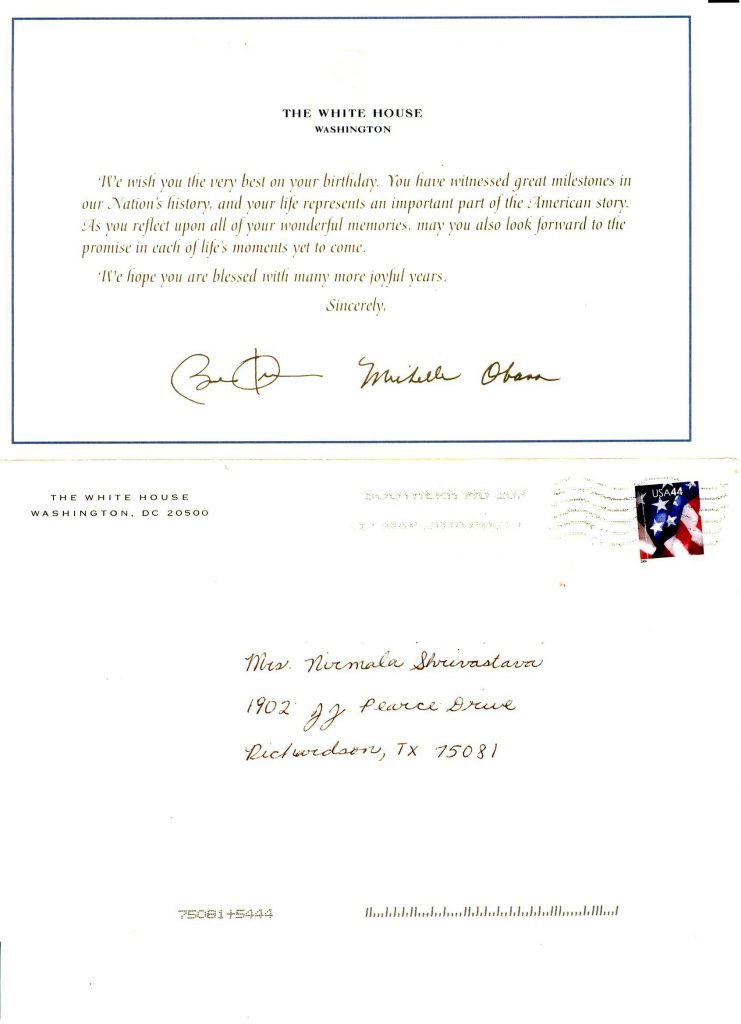 ●Italy, 1986: Declared the ‘Personality of The Year’ by the Italian Government.
●Moscow, Russia,1989: Shri Mataji had a meeting with the Head of the Ministry of Health, USSR. Following which Sahaja Yoga was granted a ‘Full Government Sponsorship’ which included funding for promotion and scientific research.
●St. Petersburg, Russia, 1993: Inaugurated the first International Conference on Medicine and Self-Knowledge, which became an annual event at the Academy thereafter.

●St. Petersburg, Russia, 1994: Got appointed as Honorary Member to ‘The presidium of Petroyaska’s Academy of Art and Science’ and was told, “You are even higher than science.” Only twelve people so far have been granted this honor; Albert Einstein is one among them.

●Brazil, 1994: The Mayor of city of Brazilia welcomed Shri Mataji at the airport and presented Her with the ‘Key to The City’, and sponsored all of Her programs.

●1994: Nomination for the Nobel Peace Prize.

●Sydney, Australia, 1995: The Mayor of Sydney officially welcomes Shri Mataji during Her visit to Australia.

●Sophia, Bulgaria, July 26, 1995: General Secretary of the international ‘Ecoforum for Peace’ expressed appreciation to Shri Mataji and wished realization of Her goals and ideals.

●1996: Nomination for the Nobel Peace Prize.

●India, 1997: The ‘Unity International Peace Award’ by the Unity International Foundations. Shri Mataji’s name included to the List of The Greatest People of The Planet for her fundamental contribution to the scientific and spiritual development. 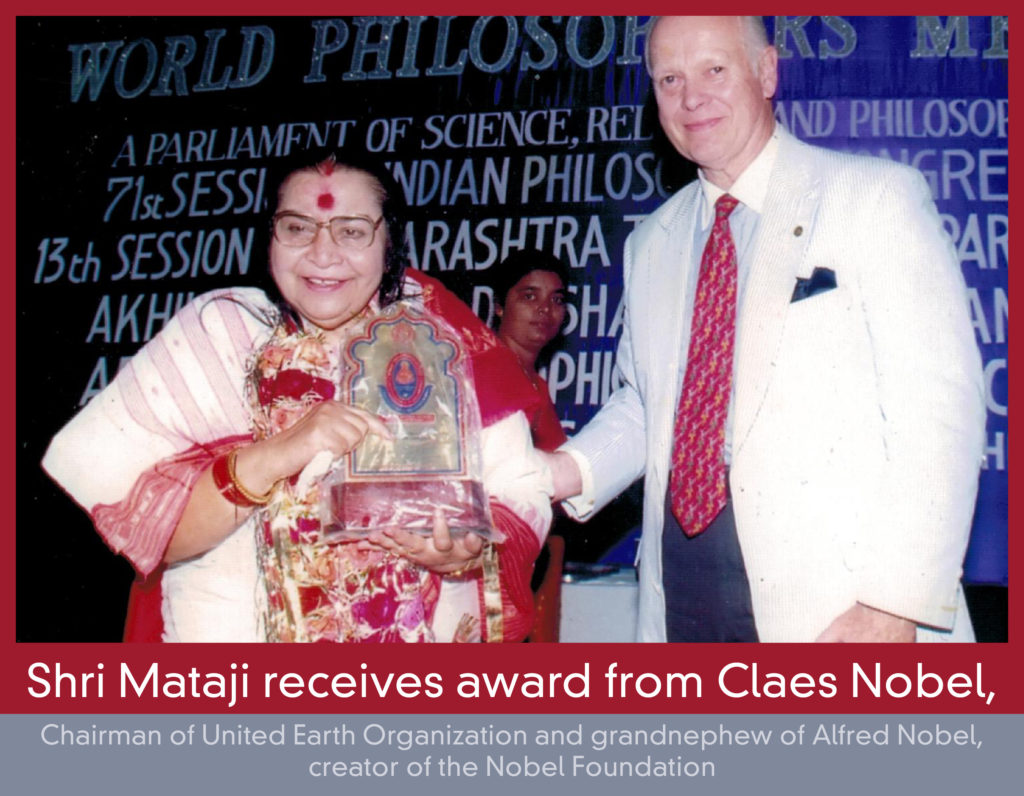 ●Delhi, India, 1998: Greetings from the President and Prime-Minister of India on Shri Mataji’s 75th Birthday.

●Moscow, Russia, 2003: Sahaja Yoga awarded “Best diagnosis and therapies of regenerative medicine 2003” by the Ministry of Health of Russia.